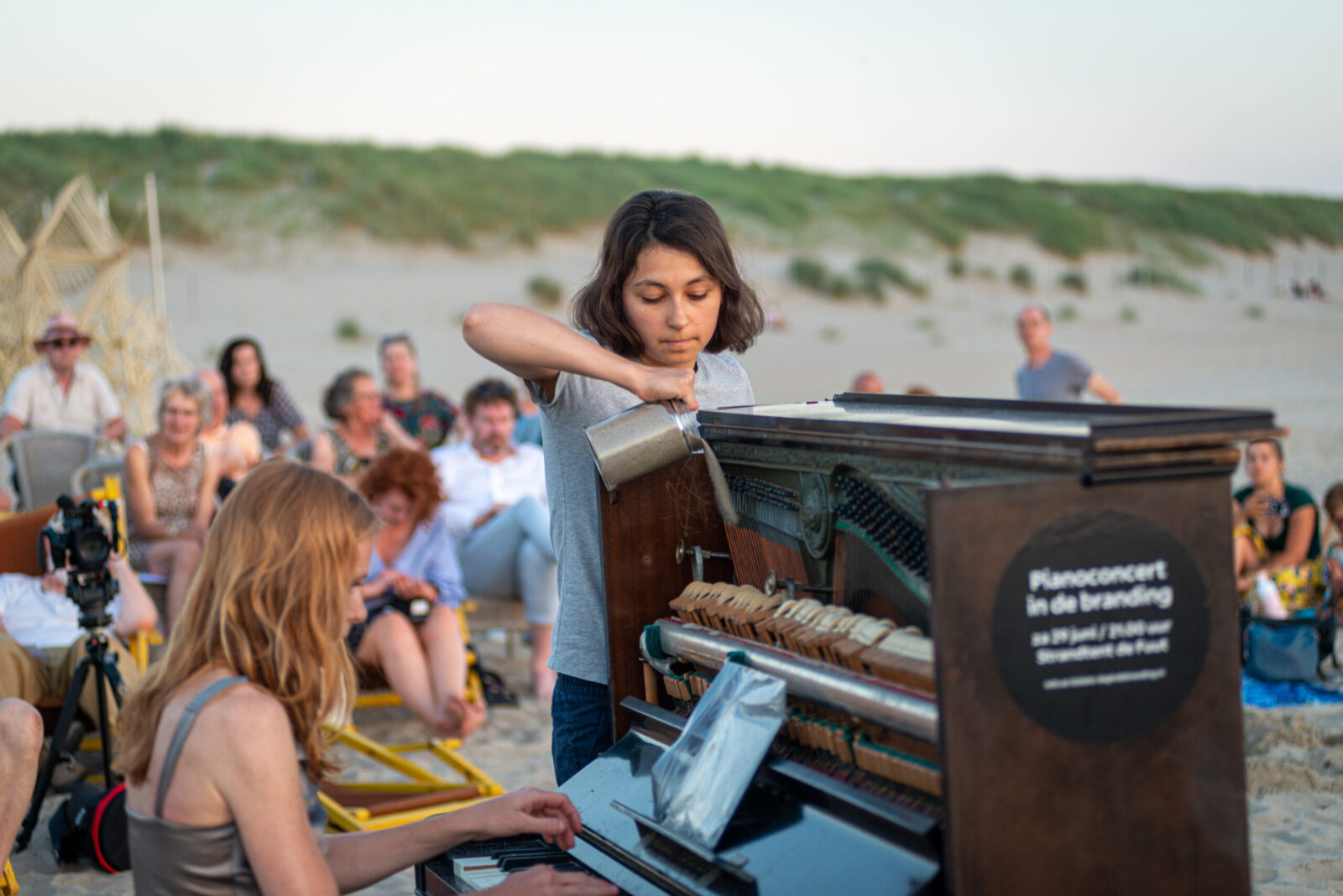 By Maya Verlaak, posted on 9 July 2021 in Associate Makers

From 2021-24 we’re assembling a group of sixteen Associate Makers who’ll make and create works for the musicians of Stichting Ensemble Klang. The Associate Makers come from multiple disciplines and backgrounds and are an integral part of our organisation, giving shape to our output for the coming years. We asked each of our Associate Makers about their own favourite work. Here, composer Maya Verlaak talks about Song & Dance – an excessively elaborate effort to explain or justify.

A piece that revealed something important about my compositional interests and is something I continued developing after discovering it, is my ensemble work Song & Dance – An excessively elaborate effort to explain or justify. I was given the opportunity to compose for the International Ensemble Modern Academy (IEMA) in Germany as part of the ULYSSES Network. I was offered nine rehearsals between March and August 2017 and this enormous amount of time allowed me to take risks, do things I had never done before and most importantly, really work with the musicians and receive feedback.

The creative process started with the observation that composers often talk about their work in order to justify it, and when they do, they analyse it. To directly highlight the theme of justification in this piece, I developed an idea for the ensemble to not receive any written music from me, but rather to receive a justification of the music instead. They thus receive a musical analysis of the work, rather than a conventionally notated score.

The material I analysed is reconstructed as a three-part musical analysis game. Playing the game recomposes the analysed work but most importantly, the musicians have complete insight into the construction of the piece. To play the game they have to use the analysis material and follow the rules, which I constructed and developed from my analysis of the work.

This new notation allows me to share the usually hidden compositional process. As a result, the musicians are aware of the compositional structure, are more involved with the material than in a conventionally notated piece and therefore engage with an alternative performer’s point of view. The IEMA musicians observed that the piece was establishing a new relationship between the performers. After several rehearsals I noticed they had fun playing the game, something that, for social reasons, is important both to me but also for a public performance. The audience can only be drawn into the piece if the musicians are confident and fully aware of the processes in the game.

Up to now there have been eight performances of this work, two with IEMA and six by other ensembles around the world. IEMA gave the premiere at Gaudeamus in Utrecht (NL) in 2017. In 2020 it was also recorded by Apartment House (UK) and released on CD by Another Timbre.

This experience with IEMA is important to explain as it was the first time I fully explored alternative notation in support of a concept, and in support of sharing my concept with the performers (and audience). These are two compositional subjects I have been carefully developing since; I now invent a new notation for every new composition and think about how to share a concept with the audience as well. Compositional processes often result in crafting a particular environment and then releasing it, in the hands of the performers, for the material to develop, stay (partly) static or disintegrate. Even though I allow some freedom in the notation/performance, there always is a carefully crafted environment wherein the music presents itself and underlines the construction and concept.

Name: Maya (Giovannina Luigia) Verlaak (Belgium, 1990)
Influences: I’m not sure if I can say who strongly influenced me, I think it is more about a working attitude instead of sound, techniques or processes. It has some roots with the way of thinking of Dick Raaijmakers, Alvin Lucier, Christian Wolff, Jennifer Walshe, Johannes Kreidler, Andy Ingamells, David Helbich but also with my teachers Marc Maes, Gilius Van Bergeijk, Howard Skempton, Michael Wolters and Peter Adriaansz.
Coming projects: Maya is working on a series of works for the musicians of Ensemble Klang that began with Roulette for the piano and guitar duo of Pete Harden and Saskia Lankhoorn.