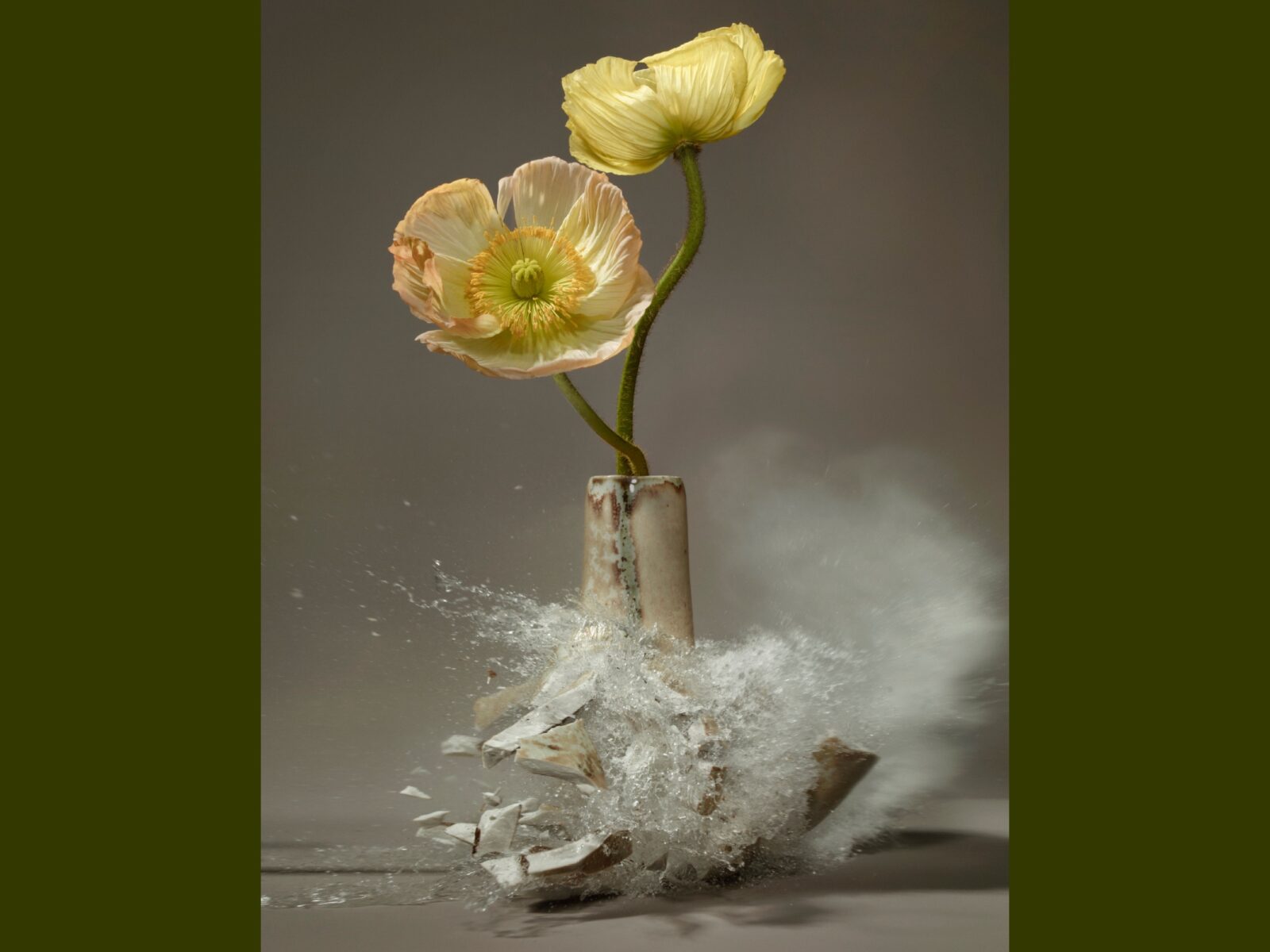 “Deep time is the dizzying expanses of Earth history that stretch away from the present moment.” Robert MacFarlane

With great great regret Ensemble Klang & Korzo announce the cancellation of January’s Musical Utopias #4. We’ve spent much of the last year, alongside a whole array of artists, assembling three days of fascinating & thrilling new live creations. The new lockdown regulations make it impossible for us to prepare and present that festival. We’re looking for later opportunities to present all of these works. Massive thanks to all the artists… we really do have some amazing work lined up for you all!

The 2022 edition of Musical Utopias focuses on those inconceivable expanses of time that are kept by “seabed sediments and the drift of tectonic plates” (Robert MacFarlane Underland). With works exploring duration, perception of time, memory, the repeated life cycles of nature, and the beauty and necessity of decay, the festival both zooms out to witness the unthinkable past, and zooms in to focus on our current instant. The programme includes premieres and works by Éliane Radigue, Carol Robinson, Oceanic, Touki Delphine, Elaine Mitchener, Jan-Bas Bollen, John Luther Adams, Knut Olaf Sunde, Spaceship Ensemble and many more.

The annual festival explores humankind’s engagement with society and the environment. A co-production between Ensemble Klang and the Korzo, the festival brings together music-makers and artists from multiple disciplines all striving to build new worlds. It is an invitation to share in a hopeful journey into the unknown, a journey that looks optimistically to the future.

Tickets are available via Korzo.

Carol Robinson joins Ensemble Klang for the festival’s opening concert, a submersion in to the expansive world of Éliane Radigue’s OCCAM OCEAN series. These meticulously crafted works, created in close collaboration with the performers, are a continued expression of Radigue’s entirely personal attitude to time and development that stretches back some fifty years, through an oeuvre encompassing multiple media: electronic, tape, analogue synthesizer, and since 2005 purely acoustic works.

OCCAM HEXA V is co-written with one of Radigue’s closest collaborators, the composer and clarinetist Carol Robinson. In addition to premiering over fifteen of Radigue’s demanding acoustic pieces, Robinson has co-composed several works from OCCAM OCEAN. Her hands-on work with Ensemble Klang in The Hague has been instrumental in bringing this music to life. As a companion to the ensemble work she will perform one of the OCCAM solo works written for her, OCCAM XVI. 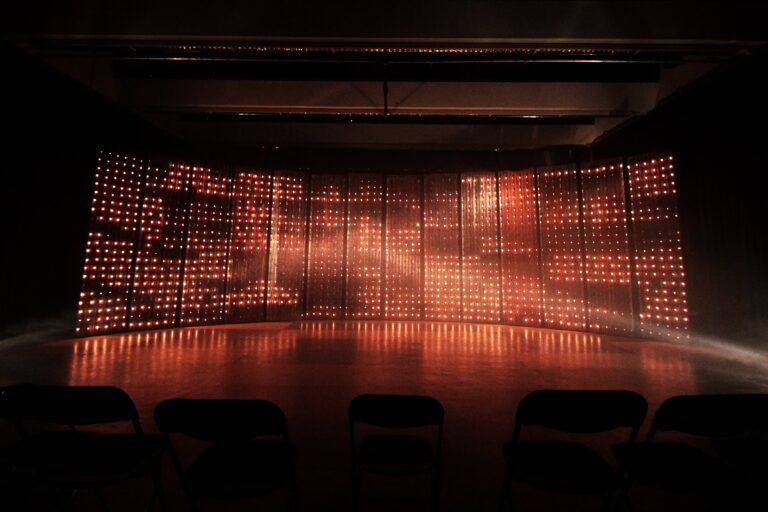 We’re thrilled to host the theater collective Touki Delphine for two late night performances of their work RELAY: a life electric – the third work in their series exploring the relationship between people and nature.

Nature can be violent and technique vulnerable. Man made himself master of nature and turned from prey to plague.

Touki Delphine extracted 1848 relays from about three hundred scrap cars, which served as electronic switches for flashing indicator lights. They can click and buzz separately from each other and were mounted on fourteen old corrugated steel sheets.

Inspired by the disturbed balance between man and nature, Touki Delphine uses technology to create a performance about the power and beauty of nature. About how violent it can be and how vulnerable technology is. A search for our changing attitude, from subordinate and vulnerable to superior and untouchable. From prey to plague.

Collective Touki Delphine makes visual, musical, monumental work. RELAY is an auditory and visual total work of art. A composition about developments and transience. A performance that calls for modesty.

From the climate crisis to the perils of corona. However we look at it, man, in all his supposed superiority, is inextricably connected to nature. In his latest song cycle Blight & Beauty, the Dutch composer Jan-Bas Bollen brings nature, and all its unpredictability, into focus, with inspiration drawn from the work of philosopher Timothy Morton and romantic poets such as Percy Shelley, Dorothy Wordsworth, William Wordsworth and Lord Byron.

Blight & Beauty pairs Ensemble Klang with the unique British composer, movement artist and voice acrobat Elaine Mitchener. Her performances, packed with energy and passion, pull the listener into her world. “Attempts to pigeonhole her are doomed to fail,” The Wire praised her versatility.

In his kaleidoscopic, colourful music, Bollen combines the stirring sound world of R&B and rock with the refinement of layered and structured music ideas. Like Klang’s energetic performances, Bollen’s work is equally at home on concert and theater stages, as well as in dance clubs, jazz halls and festivals. In Blight & Beauty, complex rhythms, wild punk guitars and physical bursts of energy tumble over each other, combining with intimate musings and video work to create a complete experience.

The evening includes two new works in collaboration with the composition department of the Royal Conservatoire, with Maarten Bauer and Petra Cini reflecting on the festival theme of Deep Time.

Spaceship Ensemble, is a young Hague-based contemporary classical group, founded in 2018, and featuring an international line-up. Led by the team of conductor Hardy Li, composers Julian Maple-Oliveira and Leo Lehtinen, and pianist Ivan Pavlov, they showcase themes of cultural, technological and scientific fascination, creating a voice that touches on 20th and 21st century classical music that is imbued with their own playful touch. Their unique instrumentation features keyboard instruments, accordion and plucked string instruments that create a new canvas of timbres for young Dutch-based and international composers.
At In Bloom, Spaceship Ensemble will present a programme that engages with the idea of time in different ways – be it broken clocks, retro culture, or time as a scientific phenomenon:

Contrafacta is the duo of Jesse Broekman (bass, electronics) and Christian Smith (drums, video) based out of Amsterdam and The Hague. They’ll play works from their debut album A Place to Sing at Night, which will be released on 28 January on the Boston-based label Moon Villain.

Desiccated and granulated songs (70s & 80s pop music originating from Milan, Tehran & Buenos Aires), combine with the frenetic mimicry of bass and percussion to produce an emergent form out of the dust and rubble of musical memory. Replete with fast-moving lo-fi projections, their set becomes an immersive world of blissful electronic and percussive textures.

Myrtó Nizami is a composer and pianist inspired by poetry, painting, philosophy and politics. Her music seeks a fluid plasticity in ever-changing sounds. At In Bloom, she will present two recent works from 2021: Enlil, for violin, clarinet, and piano, is performed by Kali Ensemble whose name is an homage to the Hindu goddess of time; and Magma for bass clarinet and fixed sound media is performed by Belgian clarinetist Jules Baeten. 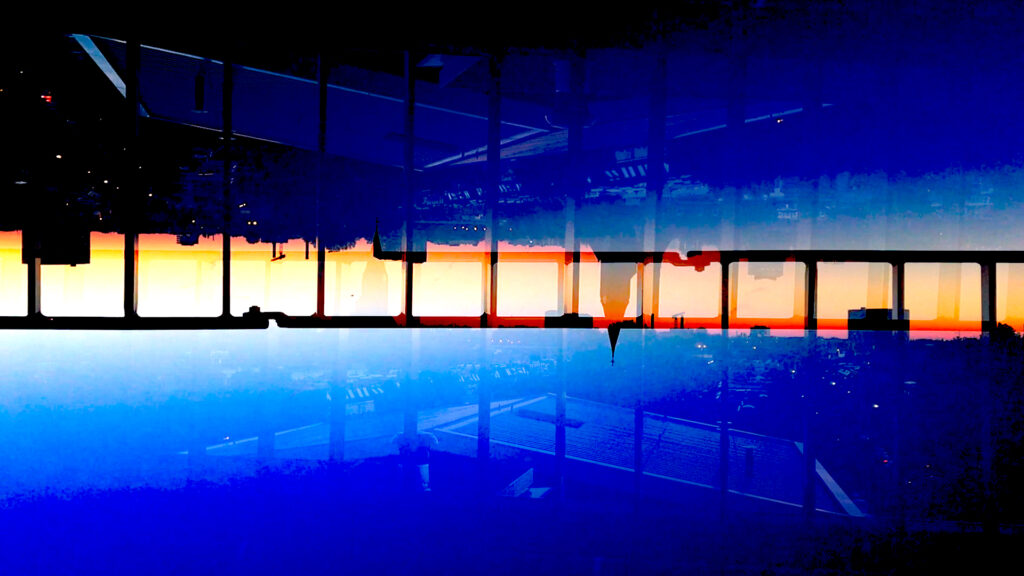 A still from Contrafacta's 'words never meant to be sung'

To close out the festival Ensemble Klang welcome Carol Robinson back to the stage. She joins the Pelargos string quartet in a performance of her quintet Forest Gazing in which she plays the birbynė, a Lithuanian folk instrument. The quartet perform Alaskan composer John Luther Adams‘ The Wind in High Places, which reflects on nature in its remotest form, utilising only natural harmonics on the string instruments: “Could any new music be more delicately sparse, more wonderfully poetic? I think not…” Chicago Tribune

Oceanic (Job Oberman) has spent 2021 taking members of Ensemble Klang around the city of The Hague and filming and recording interactions with its sound world: from the forest to the beach, the highway to the concrete factory. All these elements are brought together in A Sonically Open City, a brand new, 50 minute long work from a musical voice that spans multiple genres, embracing multiple forms of music-making and a multitude of influences. Taken as a whole, the work forms a profile of The Hague, celebrating the diversity of its landscapes and natures, and charting the breadth of activity that continues to take place within it.