Music at the Crossroads

As perceptual curiosities go, one would be hard-pressed to find many as spooky or as fascinating as the “Out-of-Body Experience.” It’s an actual thing; you can look it up. “Autoscopy,” the formal term for seeing oneself from afar, was coined in the late 19th century by Charles Féré, a French physiologist, though descriptions of the phenomenon reach far back into the ancient world.

The Egyptians spoke of visitations from alternate selves during extreme anguish or despair; the Greeks speculated that such duplicates represented the soul hovering in a no-man’s-land between worlds.  Christian theologians, proceeding from Aristotle, further cemented the association between autoscopy and imminent death—as late as the 18th century, the Russian Empress Catherine the Great presumed her hallucinated double to be the deadly spectre itself, and ordered her rather confused guards to attack it.

“Mythologically, crossroads stand for a liminal space, where the living are lured to a premature fate”

No doubt we’ve all heard reports of varying reliability—near-death experiences, migrainous hallucinations, epileptic auras, to say nothing of fringier notions such as astral projections and doppelgängers.  We know the clichés about the tunnels and the bright lights, the lysergic sense of disembodiment.

But like all things from the “X-files” of human experience, they carry a deep resonance in the mind.  We’re drawn to them, often despite ourselves.  The very idea of otherworldly visions—in particular, the sudden rapturous and ghastly encounter with one’s double at a moment of catharsis or transformation—seems to activate a secret filament in the collective imagination.  The heart jumps when we find them in writings of Hildegard von Bingen, a 12th century nun.  Or in West African folktales.  Or in American roots music. 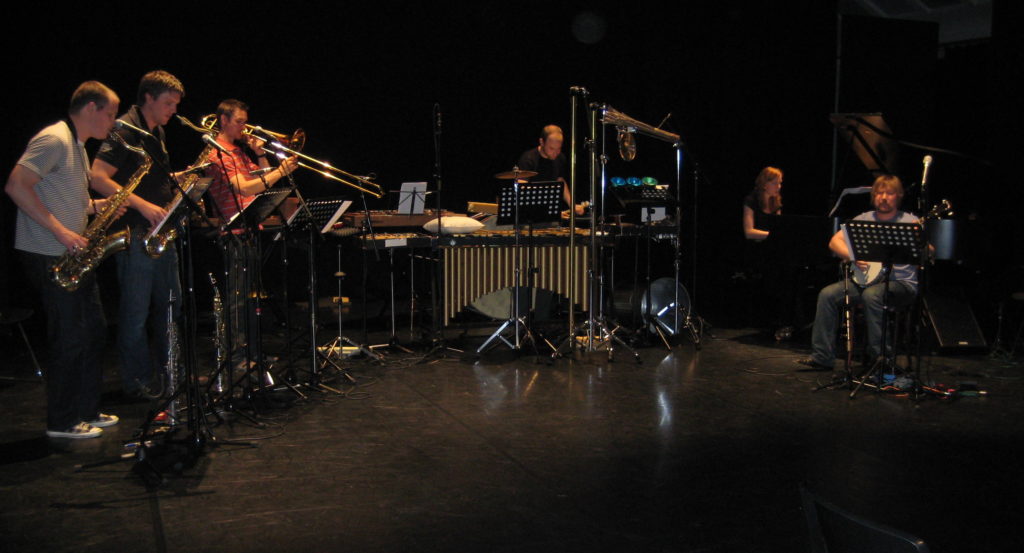 Blues icons such as Robert Johnson and Black Spider Dumpling are known for singing about mystical confrontations with the “dark man”—a negative double—having plucked the trope from slave poetry and work songs from the deep south.  In the folktale, a young man is summoned to a crossroads where a guileful character offers unique gifts in exchange for his soul.  Mythologically, crossroads stand for a liminal space, a threshold or netherworld.  It’s where the living are lured to a premature fate, and the soul takes leave of its body.  We could easily imagine the lyric dialogue in the wrenching folk song, “O Death,” being set at such a place.

While only loosely based on the song itself, Oscar Bettison’s sprawling, seven-movement requiem masque of the same name borrows from the classic narrative, refracting its various currents as though through a musical prism.

Formally, the piece has more in common with Messiaen’s Quatuor pour la fin du temps, in terms of its unusual instrumentation, archipelagic structure and morbidly sacred subject matter.  And just as the Quatuor drew heavily from “world” influences—the irregular rhythms of Indian talas, Slavic dance melodies, etc.— Bettison’s requiem assembles a broad range of traditions, all converging on the theme of death and transcendence, and knits them together as a single distillate.

Indeed, Messiaen’s inscription at the top of the score, “There shall be time no longer”—an allusion to a passage from the Book of Revelation—could equally apply to O Death.  It’s been noted that the apocalyptic epigram conveys a literal meaning, signifying a departure from the even, predictable rhythmic cells of wartime fare, no less than a figurative, scriptural one.  Similarly, O Death announces itself almost immediately as a work unbound by ordinary temporal constraints.

“the clock stops, all voices are choked, we are delivered to an open, timeless space”

A mournful trombone rises from a queue of gently scraped piano strings.  Soon, a slide guitar joins the blues-inflected melody, and the two voices sway into one another, a slow-motion dance of glissandos.  The tenor saxes arrive, almost invisibly, to complete the harmony.  The result is at once oneiric and deeply physical, airborne yet grounded—an arresting admixture that weaves itself through the rest of the piece.

The second movement is something of a rude awakening.  Unlike the opening chorus, which is tuneful and consonant, this is angrily rhythmic and driving, perhaps suggestive of the body’s failure preceding death.  It also suggests clock-time: mechanized and unyielding; lurching forward.  Beginning with up-tempo eighth notes played on the electric guitar, a string of tight thrusts from the horns stutter in quick succession, punctured by the irregular clangs of a ship’s bell.  Then, with equal violence, the clock stops, all voices are choked, and we are delivered to an open, timeless space.

Out of the silence, a sludgy guitar, detuned a full octave down, gasps for breath.  The percussion slithers and rattles.  We seem to have reached the crossroads, a place of intermediacy and indecision, where tonality and meter are suddenly held in question.  Chimerical gongs ring in the darkness, disembodied; winds murmur.  Eventually, the restless percussion and squawking saxes find a cohesion and a steady tempo only to fall away and gather once more, accompanied by a thundering bass drum.

Ensemble Klang & Oscar Bettison at the Recording Sessions for O Death at the Korzo5Hoog, The Hague, (c) Sarah Bettison 2009

The ambiguity reaches its apex at about the four-fifths point, when the ensemble divides in two.  Each instrument keeps a steady pulse except the piano and guitar, whose tempo slows to a crawl, gradually distending, while a cluster of bells remain curiously constant, cutting through the lower registers.  The roads diverge; for a moment, we are offered a glimpse of each path as they stretch further away from one another.

Similarly volatile contrasts appear throughout the requiem in ever stranger permutations—sudden asymmetries, eccentric deviations from the expected, vertiginous shifts in scale and proportion.  The third movement, for instance, is as unsettling harmonically as the second is rhythmically.  A galloping “scherzo-macabre,” the movement is comprised of single-note banjo strokes, syncopated attacks from the percussion and onrushing sixteenth notes from the winds, intercut with shrieking trombone whip-slides.  Half way through, however, the slides gives way to a vaguely Eastern-sounding interlude—part gamelan, part Coltrane.  The saxes begin alternating between two multiphonic chords approximately a minor third apart.  The hoarse, sustained oscillations create a sort of vestibular pressure, a “wind tunnel” through which brisk, incisive jabs from the percussion resound.

“a narcoleptic glockenspiel melody cycling through a nest of keys”

Bettison has referred to this movement as a symbolic “invitation from the figure of death.” With this in mind, it’s not difficult to hear the seductive beckoning in that strange channel of harmonics.

The fourth movement, the heart of the requiem, calls for its players to “play each phrase freely and not co-ordinate unless so indicated.” This allows for a somewhat informal, almost lopsided unity—a “heterophony” similar to liturgical chanting.  The trombone and guitar rise slowly, as if from a deep sleep; the soprano saxes spill out brief blues riffs, interrupted by icily dissonant vibraphone and piano splashes.  An electric guitar drone—somewhere between a prolonged, aching moan and an air-raid siren—gradually rises in volume and pitch.  All the while, the increasingly active horns seem to be pleading; in fact, Bettison’s program notes tell us that the movement as a whole represents the young man’s response to Death.  The supplication, however, proves futile: each desperate plea is met with a disturbing intrusion—the low guitar-snaps, drums and gongs continue to undercut and ultimately overwhelm the enswirled saxophones, as if to deny them mercy. 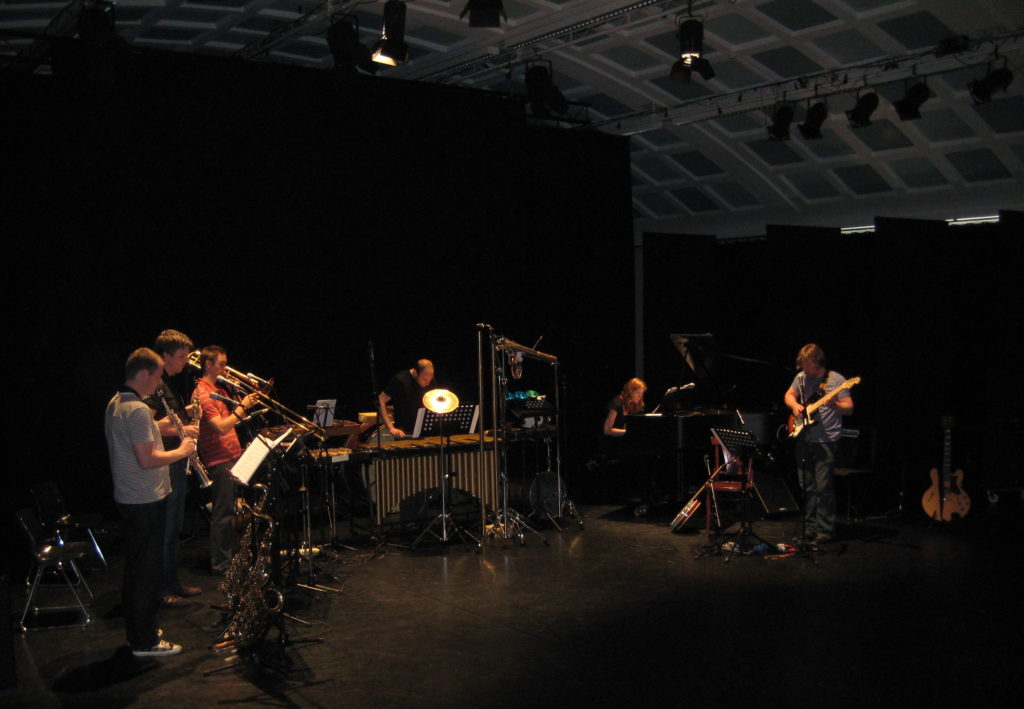 We’re thrown a life raft in the fifth movement, a soothing reprise of the opening chorus.  The trombone reiterates the sorrowful melody, each phrase punctuated with brief percussive flecks.  Again, the diverging musical paths are clear: one strand sails aloft in sweeping portamenti while the other remains moored to the ground, its rhythms tapped out on flower pots.  Could this be a memory of life from the reluctant, ascending soul?

We return to the dying body in the sixth movement, aptly titled “I Believe I’m Sinking Down.” The title comes from Robert Johnson’s Crossroad Blues, whose lyrics depict a lone hitchhiker at the crossroads, bereft of earthly companionship as well as divine salvation.  Bettison begins with shrill, ornithological flutterings and furious rhythmic bursts reminiscent of Stravinsky.  The clock stops abruptly, as it did in the second movement, loosing a chorus of winds which inch down the blues scale and trail off into whispers.  We shift back and forth between the two worlds—the ethereal drizzle of the saxophones and the trenchant pumping of the trombone—both of which are characterized by clear downward motion.  If the fourth movement was an ascension, this represents the reverse—a slow, agonized descent into abysmal depths.

“Could this be a memory of life from the reluctant, ascending soul?”

The requiem concludes with a narcoleptic glockenspiel melody cycling through a nest of keys, never quite settling.  Phrases slide off like tangents from a circle; pitches drift into microtones.  A ghostly loop of bells forms a kind of shimmering fog, something akin to what the blues might have sounded like had it originated in Java.  The air-raid siren returns, along with galumphing stomps from the drums.  Nothing expresses the effect as precisely as the title, “Lights in Ashes,” which Bettison attributes to an essay by the 17th century poet and polymath, Sir Thomas Browne. “Since our longest Sunne sets at right descensions,” he wrote, “…it cannot be long before we lay down in darknesse, and have our lights in ashes.”

But what has happened to our narrative?  Has it chosen a path? “Lights” and “ashes” are, after all, binaries: one is life, one is death.  Where have we ended up?

It’s not clear.  What Bettison has given us is a portrait of two forces, two points of view in diametric opposition—a dream of life from the perspective of the timeless dead and a premonition of death from the vantage of the clock-bound living.  The real subject of the requiem, then, may not be the passage of life into death, but rather the division itself, the simultaneity of states we face at the crossroads.  Like an Out-of-Body Experience, we are in two places at once.