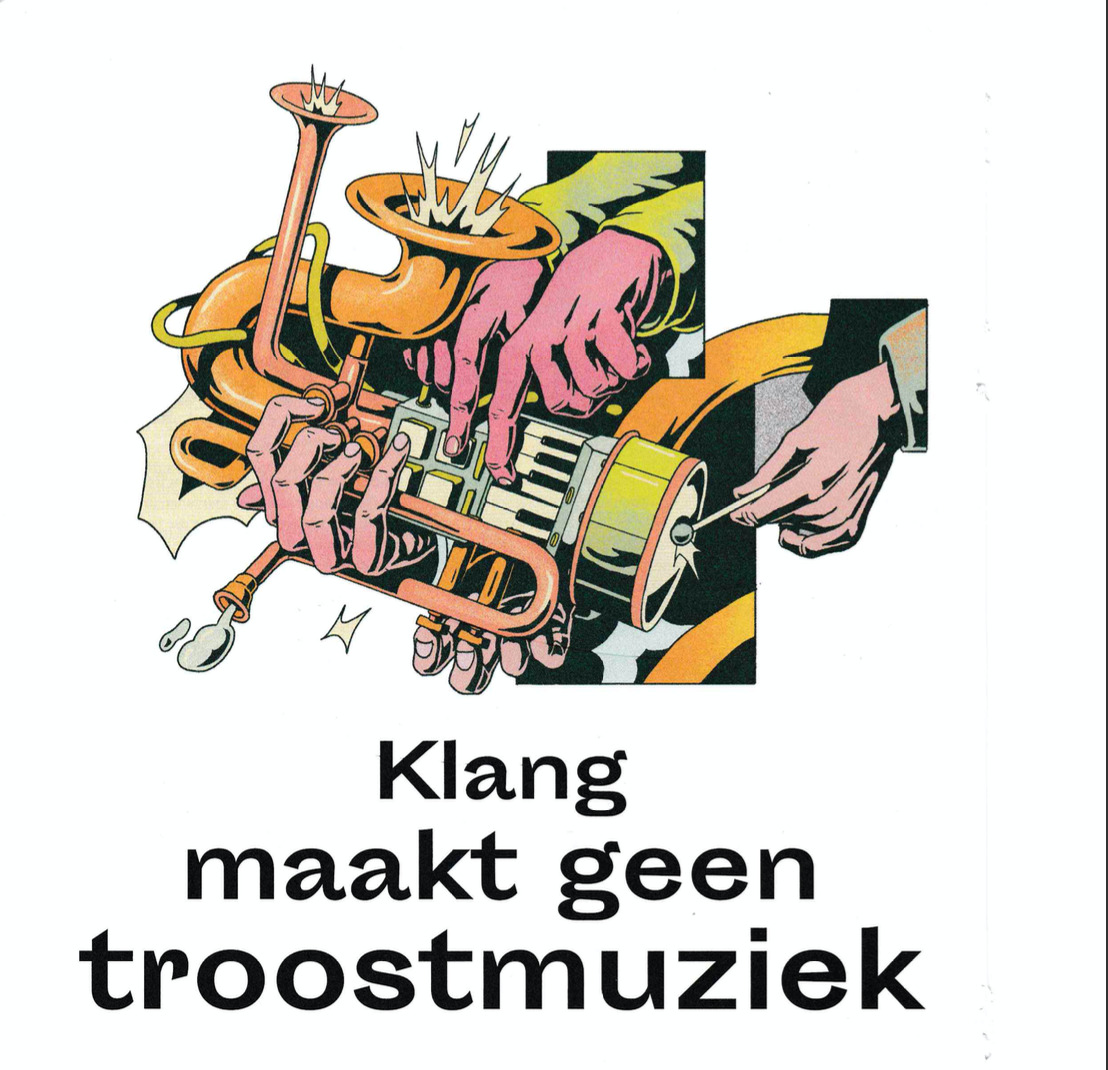 By René van Peer, posted on 8 November 2021 in Stories

This article by René van Peer originally appeared in Dutch in the VPRO Gids magazine in November 2021.

This year’s edition of November Music, the leading Dutch festival for contemporary music, places Ensemble Klang in the spotlight. Based in The Hague, they’ve been around for nearly twenty years, with their performances weaving energy with precision. Klang will profile their versatility and the wide scope of their repertoire during the festival.

“Yeah, how would you describe Ensemble Klang?” Pete Harden, guitarist, composer, and artistic director of the ensemble, has to take some time to think. Founded in 2003, Klang consists of electric guitar, keys and percussion, and a horn section of two saxophones and a trombone. “Simply said, we’re a sextet: both a chamber music ensemble and a band. The latter relates maybe to amplification: something that gives our sound impact. In addition, we work with creative minds from different backgrounds, people who have something to say about the world. Artists who, like us, strive for something just beyond reach. That produces music with a certain energy, tension. We don’t serve up comfort-music.”

He mentions An Embroidered Forest as an example, one of the projects that Klang has in production this autumn. The installation-concert pairs Litanies of Trees by Keir Neuringer, which appeared on LP earlier this year, with a work by artist Sarah Vrugt: an image of a hundred thousand trees, embroidered by more than a thousand volunteers. It will be performed at the opening of Amare, the new home of the Royal Conservatoire in The Hague, where the members of Klang studied.

“It’s the process of doing things together,” says Harden. “The question is how you can make a difference as an artist. We can’t provide answers, but hopefully we can ask the right questions. In this case, it’s about building a network of people who create something together. That gives hope. Keir has written music inspired by his childhood relationship to trees, and also a letter to his five-year-old son. Because it is so personal, it can touch people.”

That network of people who create something together, neatly describes how Klang operates, as well. With only one line-up change in all those years (saxophonist Michiel van Dijk replaced Heiko Geerts) it is a close-knit core. Around it revolves an ever-expanding group of musicians and composers with whom Klang performs and records albums, most of these on their own label. In 2013, Walden was released, a composition by Heiner Goebbels, performed that same year during November Music festival. For the concert and the album, Klang was expanded with four string players, a double bassist, and saxophonist Keir Neuringer, who also acted as narrator.

Also notable are collaborations with composer Peter Adriaansz from The Hague. His work was included on one of three CDs in a debut series, which Ensemble Klang released in 2010. Earlier this year the enchanting, hypnotic album Environments appeared, with spoken reflections in three parts about everyday life and its significance. In the first part, Adriaansz can be heard reading a fragment from Zen and the Art of Motorcycle Maintenance, a description of a motorcycle trip from Minnesota to northern California. The ensemble plays a single note for more than twenty minutes. Played on different instruments and with different techniques, that note takes on different hues, making you forget that you actually hear no more than that single note.

The closest Klang came to rock music was a collaboration with Knalpot: the duo of drummer Gerri Jäger and guitarist Raphael Vanoli. Intense bursts of drums, the sounds of electronic toy instruments, improvised twists and a dazzling light show spiced up the concerts. Possibly the most hallucinatory piece that Klang put on their repertoire is Fausto Romitelli’s Professor Bad Trip. The complexity of the music necessitated performing with a conductor, Christian Karlsen. And Ensemble Klang provides a stage to that ever-expanding network of collaborators in its annual festival of Musical Utopias, with the fourth edition coming in January 2022 in the Korzo in The Hague.

Among the four programmes on Klang’s November Music schedule is the premiere of the song cycle Blight & Beauty by Jan-Bas Bollen. Its theme is the beauty of decay, which it shares with English Romantic poets Percy Bysshe Shelley, William Blake and John Keats. Bollen is one of the composers with whom Klang has been working for many years, with the new work scored also for the versatile vocalist Elaine Mitchener. 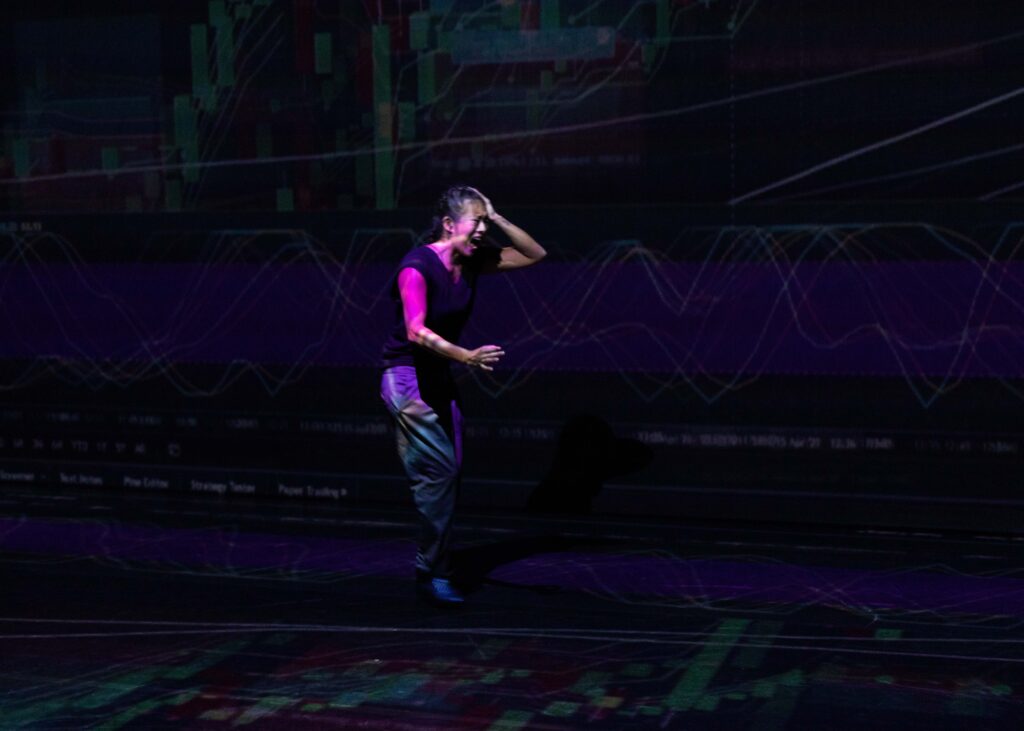 Singer Stephanie Pan, with whom Klang previously performed her technological song cycle Have Robot Dog, Will Travel, can be heard in Follow, a dazzling show with video and electronics about the reliability of news by Igor C. Silva and Aaron Landsman. 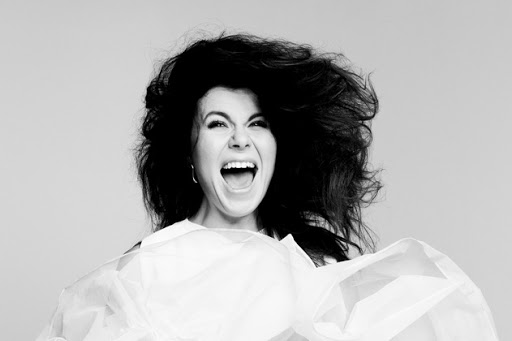 And featuring the singer Agata Zubel, Essential Relaxing Classical Hits by Laurence Osborn is about the fragmentation and distortion of people’s self-perception caused by industrial superpowers over which the individual has no control.

But most eye-catching is Klang’s premiere of OCCAM HEXA V, a new addition to the OCCAM OCEAN collection of compositions by the French composer Éliane Radigue. It is a series of works based on subtle sounds arrived at through intensive listening, and with no written score or music involved